Do Other Fruits Besides Mango Intensify the Effects of Cannabis?

If you’re a regular cannabis consumer, you probably already know that mangoes have been associated not only with increasing your high, but also reducing the time of onset, meaning that the high arrives more quickly. That’s thanks in part to a terpene (aromatic compounds that give plants their signature smells while also providing some defense from sunlight and predators) that both mangoes and cannabis have in common, myrcene. Current thought goes that myrcene, also found in lemongrass, hops, and bay leaves can enhance and quicken the effects of THC due to its ability to move more quickly through the blood-brain barrier.

Terpenes have become a popular topic of conversation in the cannabis world over the past few years because they are thought to play a vital role in how cannabis delivers its ameliorative effects. It goes without saying that cannabinoids like THC and CBD play a crucial role in cannabis’ particular effects. But how terpenes interact with cannabinoids is becoming more clear, as researchers continue to demonstrate how terpenes and cannabinoids are both vital in the full implementation of the entourage effect, a principal suggesting that the cannabis plant works best when all its compounds work together instead of isolated from one another.

Myrcene is the most common terpene found in cannabis and often emits an earthy and musky scent and flavor.

But let’s say you have a strain at home with minimal terpene content and you don’t happen to have any mangoes in the fruit basket. Are there other fruits out there that could intensify cannabis’ effects like mangoes? The answer is, you bet! Although, we do have to stretch the definition of “fruit” just a bit.

Fruits That Intensify the Effects of Cannabis

Technically speaking, nuts are fruits, and they are chock-full of omega-3 fatty acids that bind to cannabinoids like THC and CBD and move through the blood-brain barrier more efficiently, just as myrcene does. If you’d like to test this out, you’ll have to stay away from peanuts, which are technically legumes, and almonds, which are protected by a plum-like shell. Nuts fitting the definition of fruit are walnuts, chestnuts, hazelnuts, and pecans. 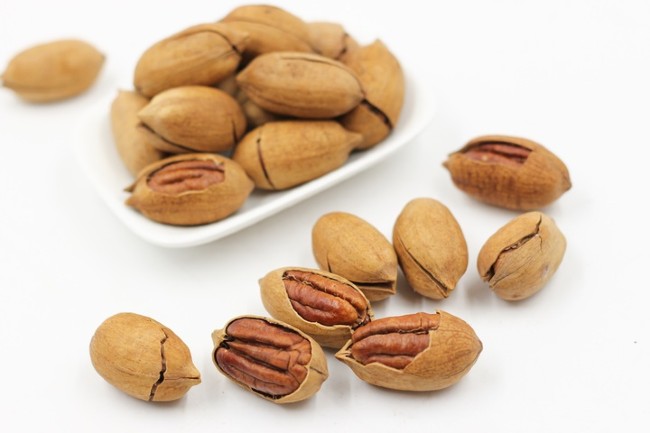 Certain nuts, like pecans, are also known to intensify the effects of cannabis. photo credit

For some other foods that could intensify your high, we’ll have to wander far away from the fruit tree. Here are a few candidates:

Other Food Items Than Can Increase the Effects of Marijuana:

But let’s say you’d rather just stick with mango. What’s the best way to get the full benefits this myrcene-filled fruit has to offer?

Does Metabolism Matter when Boosting Your High with Foods?

There are a few factors to consider if you want to try and use foods to increase your high, but the first thing to keep in mind is your metabolism. If your metabolism runs high, eat 2-3 mangoes approximately two hours ahead of your smoke sesh. For those with a slower metabolism, one mango about an hour ahead of time should suffice. This is all anecdotal guesswork of course, but the idea is to have myrcene circulating through your system when you begin your cannabis consumption.

To really get the full benefit of myrcene, stay away from mango juice (unless you juice it yourself) from the store. Juice, in general, is frequently chock-full of unnecessary sugar and in actuality may contain little to no myrcene, the ingredient you’re really after.

Have you tried any of the fruits and foods above to increase your high? Share your experiences in the comments below.

Erin Hiatt is a New York City-based writer who has been covering the cannabis industry for more than six years. Her work - which has appeared in Hemp Connoisseur Magazine, PotGuide, Civilized, Vice, Freedom Leaf, MERRY JANE, Alternet, and CannaInvestor - covers a broad range of topics, including cannabis policy and law, CBD, hemp law and applications, science and technology, beauty, and psychedelics.

Erin's work and industry insights have been featured on the podcasts The Let's Go Eat Show, In the Know 420, and she has appeared as a featured panelist on the topic of hemp media. Erin has interviewed top industry experts such as Dr. Carl Hart, Ethan Nadelmann, Amanda Feilding, Mark A.R. Kleiman, Dr. James Fadiman, and culture icons Governor Jesse Ventura, and author Tom Robbins. You can follow her work on LinkedIn, Wordpress, @erinhiatt on Twitter, and @erinisred on Instagram.